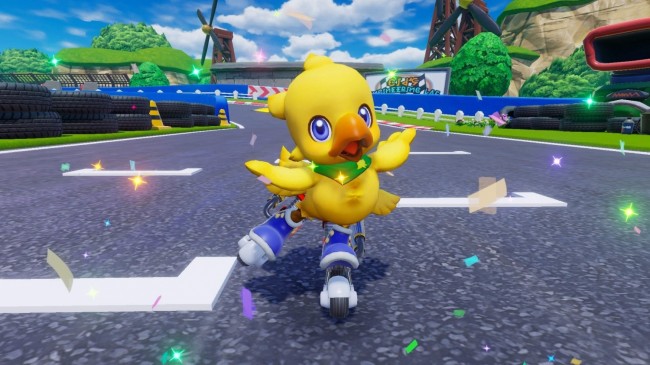 Square Enix announced the release of their Final Fantasy­-themed racing game, "Chocobo GP," and while fans are waiting for the game's showcase in Tokyo Game Show 2021, according to Gaming Bolt, several news outlets in Japan are posting videos of its gameplay.

The said videos also shown other in-game elements that players could expect once it rolls out to the Nintendo Switch.

The said game, according to Nintendo Life, was a follow-up to the 1999 racing game, Chocobo Racing, for the PlayStation 1, and much like its predecessor, Chocobo GP will have characters, locations, and other elements that came from Square Enix's famous role-playing game franchise.

What to Expect in Chocobo GP

In Chocobo GP, according to Nintendo Enthusiast, Chocobo and friends will enter a racing tournament where the winner of the said race will get "anything their heart desires." To do this, they need to race across multiple different places, hosting different tracks that they will traverse.

The characters in the game will each have its own unique rides, with different core parameters for Speed, Grip, Acceleration, and Drift, as well as different abilities that players can use to alter the outcome of the race.

Chocobo and Camilla are wearing roller blades, while Atla, the "Racing Hero X" Moogle, along with Shiroma the White Mage, will participate in the race with their cars.

Other characters that are said to  be included in the game's roster, according to Screen Rant, includes Behemoth from the Chocobo series and Mecha Chocobo from the World of Final Fantasy

While on a race, they will pick up Magic Eggs, which contains Magicite, magical powers that has three levels. The powers that are inside of these eggs can be powered up once they collected more of the same type.

Fire can shoot fireballs, Water can create puddles that becomes obstacles on the track, Doom curses an opponent driver to crash, and the MBarrier can block a magic attack.

Aside from these spells, players can also drift in several corners, creating an advantage in the race if they did it successfully.

According to Nintendo Life, Chocobo GP will have its online and local multiplayers modes, including a Tournament that supports up to 64 players, as well as a single player game modes, where players will race against AI.

Fans of both Final Fantasy and Mario Kart will have an awesome new party game in their hands with Chocobo GP, which will be released for the Nintendo Switch this coming 2022.