'New World' Saltpeter Location Guide: Where to Find Them, How Transform Them into Gunpowder 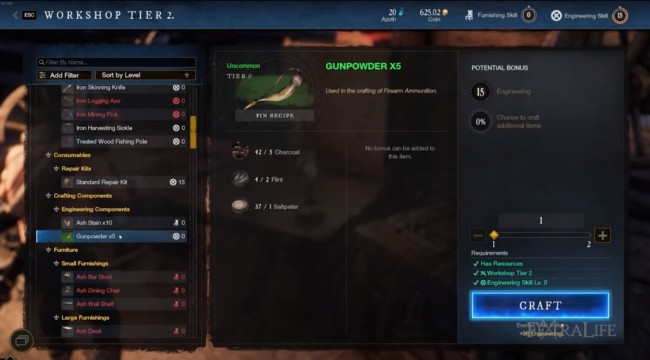 In New World, a recently released multiplayer online role-playing game made by Amazon Games, players will traverse in a world set in the alternate 17th Century, where exploration is flourishing, and supernatural beings plague the islands.

Along the way, they will need to craft items such as weapons in order to combat said beings. One of said items is the gunpowder that can be used in muskets. In order to create this item, they must first need to find its key ingredient - saltpeter.

Where to Find the Saltpeter

In order to gather saltpeter, according to The West News, players must first have their own flint pickaxe or better. This pickaxe can be acquired either through random drops from enemies, loot chests, or as a quest reward.

They can also craft it with a Flint and a Green Wood, as long as they unlocked the Engineering trade skill and the Tier 1 of the Workshop.

Once they got the said pickaxe, they must need to find the location of the said material. According to Dexerto, there are locations in the Monarch Bluffs, Windsward, and Everfall for players to go to if they want to collect the saltpeter.

How to Craft Gunpowder

Once they got the saltpeter, they can now create their very own supply of gunpowder. According to Gosunoob.com, aside from one saltpeter deposit, they will also need five charcoal, which they could make by harvesting wood then throw it in the smelter station.

Aside from that, they will need the two Flint, which can be collected in the sand that is near a body of water in the Everfall Watchtower.

Once they got all of the materials, they will need to go to the Workshop, then select "Gunpowder" from the list of recipes in the Recipe Menu. After that, they will click "Craft," then they will have their very own gunpowder.

Once they got their supply, they can now use it in their muskets. They can also create iron cartridges for the said weapon. To make them, according to vg247.com, players must need the gunpowder itself, along with 4 iron ingots and a linen.

Just like the gunpowder, the iron cartridges can also be crafted in the Workshop by accessing its Recipe Menu.