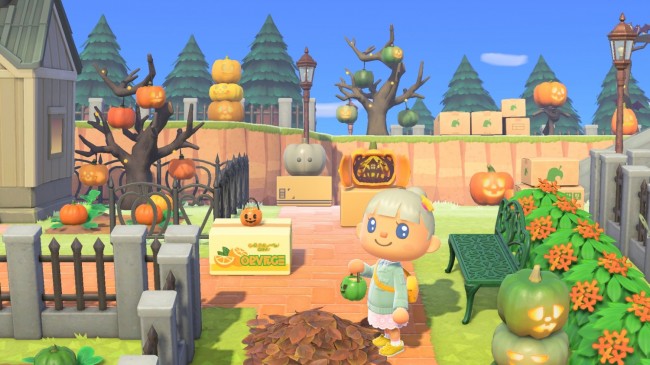 The Halloween season is coming both in real life and in the Animal Crossing: New Horizons as the life simulation game will bring in new seasonal items that are in-themed with the said spooky season.

Happy October, everyone! Are you as excited for Halloween as I am? Keep an eye out for candy in Nook's Cranny all month long, and use pumpkin starts from Leif's stall for this year's crop. I hope you have fun getting into the spirit! pic.twitter.com/RkPZSpe6C4

The said items will add to the previous Halloween event items, which will be reintroduced this year.

The said Halloween-based items will be available in the game's Nook's Cranny in orange, yellow, green, and monochrome variants, and each of them will cost 11,600 bells.

According to The West News, the in-game store will have the stocks of these items ready for selling on a daily basis within this month of October until Halloween comes, just like last year.

New players will also enjoy the Halloween inside Animal Crossing: New Horizons as older Spooky Set items will return in the game.

The said holiday-themed items include the Spooky Arch, the Spooky Carriage, the Spooky Fence, and the Spooky Tower. The said items will also be available in Nook's Cranny.

The shop will also sell Pumpkin Starts, which can be planted in the players' islands in order to have their very own pumpkin path. Those who want to keep their patch growing after October ends will want to stock up to these seedlings.

The pumpkins that will be harvested in the patch can be used as materials for the "do-it-yourself" recipes for several of the Spooky Set items.

Aside from the decorations, the Able Sisters Shop will also selling Halloween-themed costumes, ranging from witch costumes to devil's horns to animal suits.

Aside from the costumes, two new Halloween-themed character customization sets are also available during this of October. These said sets can now be bought in the Nook Miles section of the Nook Stop Terminal.

Animal Crossing: New Horizons will also bring in items based on the Mexican holiday, Day of the Dead, or dia de los Muertos. According to Showbiz Cheat Sheet, the Marigold Decoration will be available on the Nook Shopping's Special Goods from October 25th to November 3rd.

The Candy-Skull Mask will also be available in the game in three variants, namely purple, orange, and blue, and it can be attainable by helping Gulliver in a quest in the game.

Animal Crossing: New Horizons will also bring in the new Halloween Night event for its players. The said event, according to Animal Crossing World, will take place on October 31st at 5:00 PM local time, and it will last until the midnight.

During the said event, Jack the Pumpkin Czar will be appearing for a special visit, while the villagers will wear fun Halloween costumes and roam around the island for "Trick or Treat."

Players need to give them Halloween Candy, which are available in Nook's Cranny, in order to receive items like Lollipops and Spooky Set items such as the Spooky Flooring, the Spooky Garland, the Spooky Rug, the Spooky Table Setting, and the Spooky Wall. Both the garland and the table setting also have DIY recipe with them.

The Lollipops, on the other hand, can be exchanged to other Spooky Set items like the Spooky Carriage and the Spooky Wand after exchanging them for said items to Jack.

READ ALSO: 'AC: New Horizons' How to Tell Which Are Real or Fake Redd's Paintings and Statues Guide