'Genshin Impact' Yummy! Barbecue Under the Stars Event Guide: How to Prepare the Dishes 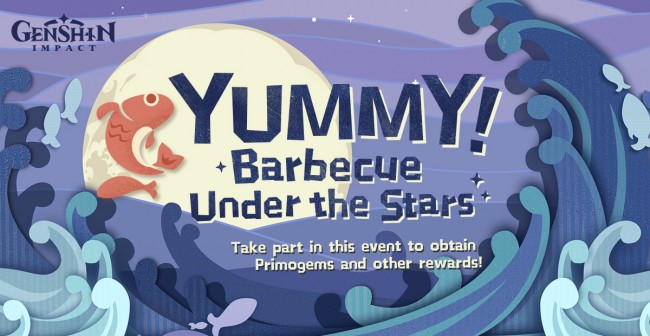 It is time to cook to get some rewards as Genshin Impact launched its "Yummy! Barbecue Under the Stars" event. The said event will let the players of the online role-playing game to cook different fish dishes for Shiki Taishou.

For every cooked dish, according to Gamepur, they would receive in-game items such Hero's Wits, as well as Mora and Primogems, depending how good they prepared them.

In order for them to participate in the said event, players must do either one of two ways.

Web Event "Yummy! Barbecue Under the Stars" Now Online: Grill fish with Shiki Taishou to earn Primogems and other rewards

First, according to GoSuNoob.com, they must talk to Paimon in the game, then afterwards, they will click the Special Event tab. This will transfer them to their web browser, where a special webpage for the event will be loaded.

Second, they need to enter the URL for the said webpage in their web browser in order to access it and participate in the event.

Either way, they must have logged in first in the game, as well as they must be at least Adventure Rank 10 and above to join.

How this Event Works

Once they are in the webpage, they will be greeted with a minigame where they need to "cook" something.

But before that, they must have the ingredients first. To obtain said ingredients, particularly the fish, according to Kotaku, they must need to wait for a Childe to catch for them.

Players can have a fish coming from him for every six hours, which makes it possible to have less than 30 fishes during the event.

Once they got the fish, they will proceed to the barbecue minigame, where they will add a specific amount of seasoning to fish, as well as make the right timing to remove it from the fire in order to achieve its desired doneness.

Aside from receiving rewards, new recipes will be unlocked as they progress on in the event, and will reward them with ten crystal cores, which they can use as materials for producing condensed resin.

How to Prepare the Dishes

As mentioned earlier, players must meet the specific amount of seasoning, as well as the right timing of removing the it away from the fire, in order to successfully create a grilled fish dish during the event.

To cook the Fresh and Juicy Grilled Fish, according to vg247.com, they must put a right amount of seasoning to the fish and have its both sides half grilled.

In making the Grilled Fish with Mild Seasoning, they must also put the same right amount and cook one of its sides until it is golden brown.

In preparing the Wild Style Grilled Pufferfish, the must put a right amount of seasoning to the bitter pufferfish, then both sides must be cooked until golden brown.

In cooking the Exquisite Medaka Dish, they will also need to put the same amount of seasoning to a medaka fish, and cook it until golden brown.

To create the Perfectly Grilled Golden Bass, they will put the same amount of seasoning as before to a golden bass, then cook it until golden brown.

In making the Ordinary Grilled Fish, they need to put a right amount of seasoning in any fish, then cook it until both sides have that reddish color.

For the Grilled Black Snakehead, they need to season the fish with any amount of seasoning, and cook it until its both sides are burnt.

For the Secret Dishes, to make the Explosive and Overcooked Grilled Fish, they must put a right amount of seasoning to the medaka fish, then they will grill its both sides fully.

In cooking the Grilled Fish that Broke Through Dimensions, it requires to season any fish with any amount, and cook it until a hole is burned through it.

To cook the Amazing Grilled Fish that Impressed Paimon, they need to put a right amount of seasoning to a golden bass, then cook one side until it is fully grilled, and the other until it is burnt.