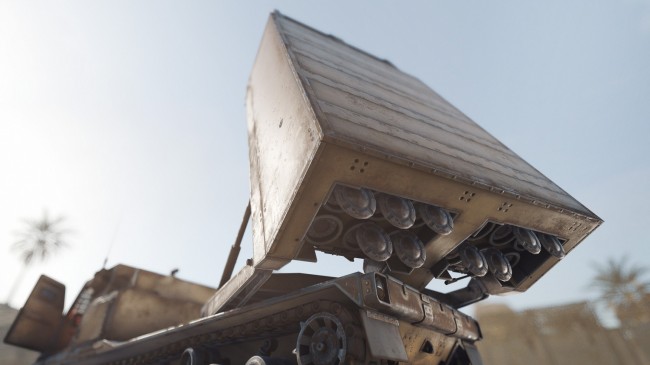 It is time to take the battle to the hot sands as Rust had received its latest Patch Update, which brought in new additions to the multiplayer online survival game, including a new military desert base that players can traverse in.

The said patch update also added other in-game elements, as well as it improved several aspects in its gameplay, and fixed several issues that might the game if they are not addressed.

Enter the Desert Military Base

Players of Rust can now enter the aforementioned desert military bases in the game courtesy of its already released patch update.

According to a post in the game's website, the said locations will also have Multiple Launch Rocket Systems, or MLRS, parked in several areas.

READ ALSO: Ubisoft offers 'Ghost Recon Breakpoint' to Players for Free for a Limited Time: How to Get It + Conquest Mode, Destabilization Missions Explained

These four-wheeled rocket launchers, according to The Gamer, despite the fact that they cannot be driven, can be set up in order to fire up to 12 rockets at almost any target within the area, delivering devastating damage to their opponents, especially if they are not protected, as well as enemy bases.

However, the MLRS can be countered by surface-to-air missile (SAM) sites, which are also scattered in the area. Players can use up to three SAM sites in order to fend off its barrage of attacks.

In order to use them, they need to acquire the MLRS Aiming Module, which can be found in one of the locked hackable crates in the military desert base, as well as a whole set of 12 MLRS rockets that can be found in APCs and attack helicopter crates.

Then, they will interact with the back of the vehicle, then insert the rockets in it. Afterwards, they will get in the MLRS, open its Aiming Module slot, and insert the said module, activating its weapons system in the process.

Then, they will interact with the targeting system, and set their desired target by clicking and dragging the red marker that can be seen in the its interface. From there, they will see a white circle, indicating where the rockets will actually land.

Once they got the target, they will press the button to launch the rockets that they have loaded, then they will wait for the 10-minute "break down" time limit to cool-off until they will use the MLRS once again.

Aside from these MLRS, these desert military bases also 4 monuments that they can find in the area, as well as other details such as regular loots with oil once they go from one of its entry points.

Aside from these additions, Rust's latest patch update also brought in improvements for the survival game.

According to Dual Shockers, several of these improvements include a search option while browsing shops at the marketplace, as well as an undo and redo support for painting.

The patch update can now allow players to loot items in the campervan storage while it is on a lift, as well as to use any hand gestures while crouching. It also reduced the horse dung, but it added "hits," "integrity," "travel," and "mismatch" in the game's combat log.

The patch update also fixed several issues in Rust, including several ones that affects its visuals and user interface, as well as it removed several Halloween-themed items and in-game events.