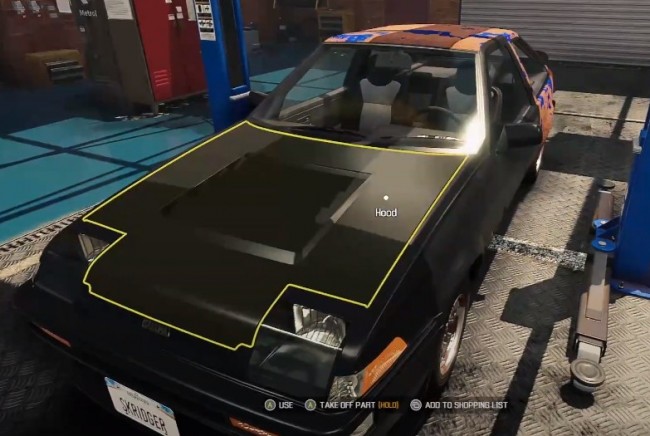 In this Story Order, players need to repair a Sakura Takumi Velin, a variation of the Sakura Takumi, or in real life, it is the 1983 Toyota Sprinter Trueno.

According to Skridger's YouTube video, the car needs to be repaired thoroughly, from its engine to its wheels and braking system to its suspension to its body.

They would also need to repair or restore several parts that are "not discovered," as well as it needs its oil, and other fluids to be replaced. They will also need to realign its headlights.

After receiving the car, they will wash its body and interior in the Car Wash, then they will transfer it in to the Car Lift in the garage. From there, they examine the car to check said "not discovered" parts eight through Examination Mode or through Additional Tools, all of which can be accessed in the car's pie menu.

During the said examination, they must have known the parts that are "not discovered," which includes its camshafts A and B, and a cam gear.

After they examined the car, they will drain its remaining oil using the Oil Drain machine, then its other fluids using the Additional Tools. Then, they will disassemble it, until they got the parts that they need to repair or restore, and its body frame was all that is left in the Car Lift.

Then, using a Wielding Machine, they will repair said body frame, and detail the interior once again. After that, they will fix the parts that still can be used with the Repair Tables in the Workshop.

From there, they will play a minigame, where they will need to land the green tabs in order to repair the parts. They will repeat the said procedure, until all of the parts needed are completely fixed.

On the other hand, those that are impossible to be repaired are needed to be sold for additional Credits and Scraps, and then, buy their new Replacement Parts.

Then, they will start reassembling the car itself, including its wheels, braking system, suspension, body kit, and lights, all of which should have been repaired or replaced. As for its engine, they will also rebuild it first in the Engine Stand.

To rebuild the engine, they need the repaired or replaced air filter, including its base and cover, as well as two cam gears, camshafts A and B, engine heads A and B, the fuel filter, the fuel rail, the ignition wires, the intake manifold, the oil filter, the power steering pump, the radiator fan, serpentine belts A, B, and C, four spark plugs, a spark plug cover, and the throttle.

After they rebuilt the whole engine, they reinstall it back to the car using the Engine Pulley, as well as its electronics, including its battery, and its fuse box, which contains new sets of fuses and relays. Then, they will refill it with new oil, brake fluid, coolant, power steering fluid, and windshield washer fluid.

Afterwards, they will transfer it to the Test Path room, where they will realign its newly-installed headlights. After they realigned the said headlights, they can now give it back to the customer, earn the Credits and XP, and clear the Story Order.