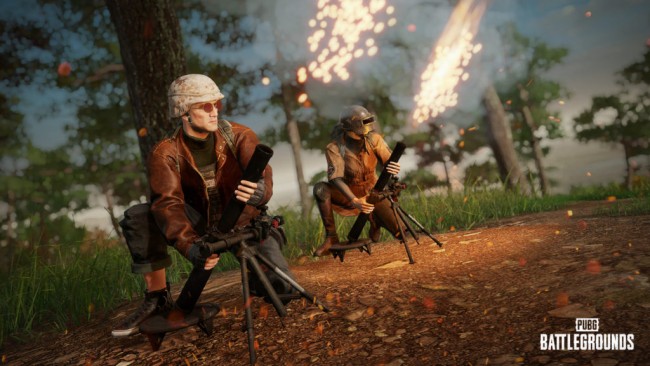 The console version of PlayerUnknown's Battlegrounds has received its Patch 14.2 Update, which brought in new in-game additions to the multiplayer online battle royale shooting game.

The said additions include new weapons, as well as a new creature in Taego that might take the game's victory catchphrase, "Winner Winner Chicken Dinner" a different meaning. The said update will also bring in improvements and fixes to the game.

As mentioned earlier, the Patch 14.2 Update has brought in two new weapons that players can use in PlayerUnknown's Battlegrounds, namely the Mortar and the M79 smoke grenade launcher.

[Console] Maintenance is complete and Update 14.2 is now live!

The Mortar, according to the patch notes for the game's PC version, the basis for the console version's update, which was posted in the game's website, is an easy-to-use weapon in several combat situations, but it needs a lot practice to achieve reasonable accuracy, including calculations for its distance.

Once they perfected it, the weapon can fire between 121 meters to 700 meters in distance, making it helpful in attacks behind ridges where throwable weapons like grenades cannot reach, as well as for defending specific areas, and destroying the trunks of several vehicles.

Once the players looted it, the Mortar will take up their primary slot, and can be deployed only on flat surfaces for three seconds. However, it cannot be placed on other surfaces like on cement, iron, concrete, water, and wooden floors. It cannot also deploy inside of buildings.

Once deployed, players will automatically crouch once firing mode is activated, and they will not move until the said mode was released. They must have ammo for the Mortar in their inventory in order to fire it, and there will be a one-second delay between fires.

The said weapon will be spawned inside buildings, but it will not appear in Supply Crates or in Secret Rooms.

On the other hand, the M79 smoke grenade launcher, according to mp1st.com, is a great weapon that can provide quick smoke cover on longer ranges, blinding other players as well as either covering their downed teammates or making their escape away from the battlefield.

Once looted, the grenade launcher will take the players' pistol slot, and will fire 40mm smoke grenade ammunitions, which is also the newest addition in the game.

The ammo will spawn in the map in stacks of 1 to 3, while it will also spawn in stacks of 2 to 3 along with the smoke grenade launcher itself.

Both the Mortar and the M79 smoke grenade launcher will be available in Normal and Custom Matches.

Aside from the added weapons, PlayerUnknown's Battleground's Patch 14.2 Update for its console version has added in a new creature in its recently added Taego map, the chicken. According to Update Crazy, the said creature will "amuse" several players, especially during fierce combats in the map.

The chicken will three different conditions, its default Calm state, which according to the patch notes, is the "most stable emotional state," while in its Fear state, it will fly or run when they hear punching, footsteps, gunshots, sounds from a vehicle's engine and exhaust, and the death of other creatures.

The Death state, which will trigger once it took damage from guns and grenades. Afterwards, it will convert into fried chicken, which players cannot possibly consume for dinner once they win a match.

Aside from the chicken, the said patch update also added in five new areas in Taego, namely the Palace, the Field, the Market, the Mountain, and the Shipyard, to the game's Team Deathmatch preset in Custom Matches.

Finally, the patch update also added "Down But Not Out" (DBNO) Swimming. With this new feature, players who are down in the waters can now slow swim their way back to the shores, and be revived by teammates.

Its air in the lungs while swimming will not be reset even when entering DBNO, hence they can still drown. If a DBNO player is constantly losing HP while having another HP loss due to drowning, it will possibly die within 10 seconds underwater.

READ ALSO: 'PUBG New State' Guide: Release Date, How to Pre-register, Where to Download, and More