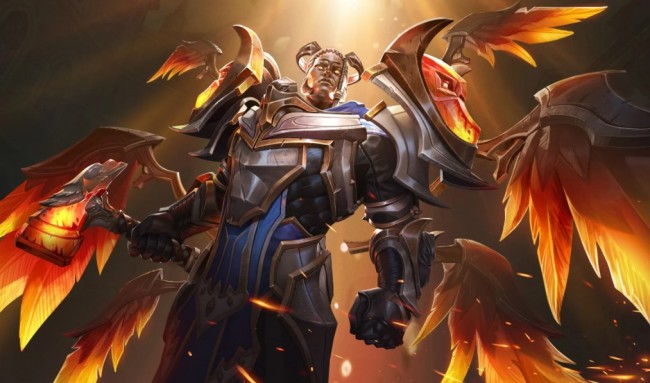 Hi-Rez Studios announced that Paladins has received its Absolution update, which introduced a brand-new Champion to its ever-growing roster.

Aside from the new Champion, the said update will also bring in new additions to the multiplayer online hero shooter game, which includes a new Limited Time Mode, set of emoticons, and a new announcer pack that was voiced by one of the virtual YouTubers, or VTubers, from Hololive.

One of the aforementioned additions in Paladins courtesy of its Absolution update is the inclusion of its new Champion, Azaan, the Eternal.

Our new Frontline Champion, Azaan is ready to deal with the Abyss by any means deemed necessary.

Play as our newest Pyre Lord and also dive into our Dark Depths Event Pass while you're at it!

According to the patch notes posted in the game's website, he will take the role of a Frontliner with a Health of 4500.

His Ire Passive Skill will reduce the damage he will take by up to 20% at 100% Ire, which will be stacked up once he takes and deals damage. If he uses any basic skill, it will consume Ire.

While his Ire is above 85%, he will deal 12% increased damage, while using a basic ability above the Ire threshold will augment said ability.

His Reckoning alt-fire will send out a projectile after a brief windup, which will explodes into an area in front of them, dealing 300 damage, while lifting them for .3 seconds. If it was casted while under Ire's treshold, it will reduce its cooldown.

His first Ability, Sanctuary, will make him create a series of five wall segments, all forming a semi-circle, with 2,500 Health each. When he is carrying an enemy into their wall using his second ability, it will deal additional damage, while stunning it. When it was casted while under Ire's threshold, the wall's Health will increase by 50%.

His second Ability, Conviction, will make him dash forward, carrying an enemy with them. If he slams said enemy into a wall, it will deal damage, while stunning them in the process.

If it was hit into a wall made by Sanctuary, it will deal additional damage, while stunning it for longer. This will consume 15% Ire, but if it was casted under its threshold, it can be used faster.

His Ultimate Ability, Deliverance, will make him rise into the air for 6 seconds, reducing the damage he will take by 50%. While on air, he will throw his hammer to the ground, dealing 725 damage, while applying Knockback on every hit.

Shortly after a hammer hits, he will teleport on the area, dealing 150 additional damage, while applying a large Knockback in an area.

Aside from the new Champion, the Absolution update will also introduce other additions for Paladins, which includes a new Brody the Shark mount.

According to Gamepur, the second flying marine animal mount that will follow the Sky Whale mount. The said mount can be obtained via a direct purchase or an item chest.

Another addition to the game is the Dark Depths Event Pass, which according to mp1st.com, will give away rewards for players who will complete its 24 Progression Levels. This includes Experience and Gold boost, loading frames, Champion Skins, and sprays.

Those who still want to obtain Season 4 Ranked Rewards, according to GLyfe, will have a last chance to do, as the said season will end after the Absolution update.

Said rewards include a "World Ender" in-game title, for those who have played a total of 100 Ranked Games, as well as a Berserker Torvald Epin Champion Skin.

Finaly, Paladins will have a guest VTuber announcer as Amelia Watson, a member of Hololive's English branch, will lend her voice in a special Announce Pack in celebration of her achieving one million subscribers on YouTube. Players can have said announcer pack for free after playing 5 matches.

TAG Paladins
© 2020 Game & Guide All rights reserved. Do not reproduce without permission.