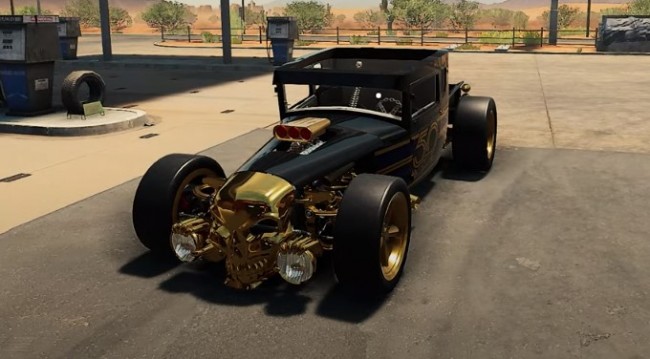 One of the those said car mods that can be downloaded is the Bone Shaker, a car that was originally created for the Hot Wheels line of diecast model cars.

Based on a Corvette V6, the said car was first released for the said toy line in 2006, and since its release, it was the most famous and popular Hot Wheels casting.

The said car also saw real life production when Mattel, the company that produces Hot Wheels, made a 1/1 scale of the Bone Shaker car, and was showcased in several auto shows. It was also appeared in other video games, such as Rocket League and Forza Horizon 6 through its Hot Wheels Car Pack.

How to Restore the Bone Shaker

Once they downloaded the file for the said car mod from the Steam Workshop, they can now see the Bone Shaker in the game's Car Auctions, the Barn, and in the case of Boblas' YouTube video, the Junkyard.

Once they purchased the car, they can move the car to the Car Wash, where they need to wash its body and interior. Then, they will transfer it to the Car Lift inside the Garage. From there, they can examine the parts that they can repair or replace either through Examination Mode or through the Additional Tools.

Afterwards, they can drain what oil is remaining inside the car using the Oil Drain machine, then the rest of its other fluids, such as the brake fluid, coolant, windshield washer fluid, and power steering fluid, using the Drain Tool.

Then, they can start disassembling the car and removing its parts such as the engine, using the Engine Pulley, the battery and other electronics, the wheels, the braking system, the suspension, the gearbox, the body kit, the windshield and other glass panels, the interior, and the lights, until what is left is the body kit.

On the other hand, those parts that are impossible to be repaired will be instead replaced with new parts, and be sold for additional Credits and Scraps.

Once they got the repaired or replaced parts, they can start rebuilding the Bone Shaker, starting with its engine.

Once they finished rebuilding the engine, they will remove it in the Engine Stand, then they will reinstall it inside the car using the Engine Pulley, then the rest of its parts.

Afterwards, they can customize the paint of its body kit in the Paint Booth, then they will transfer it to the Test Path room, where they will realign its wheels and lights. After that, they will move it to the Dyno Test room to tune the gears in its gearbox and perform a dyno test.

Once they are satisfied with the results, they can now test drive their very own Bone Shaker.