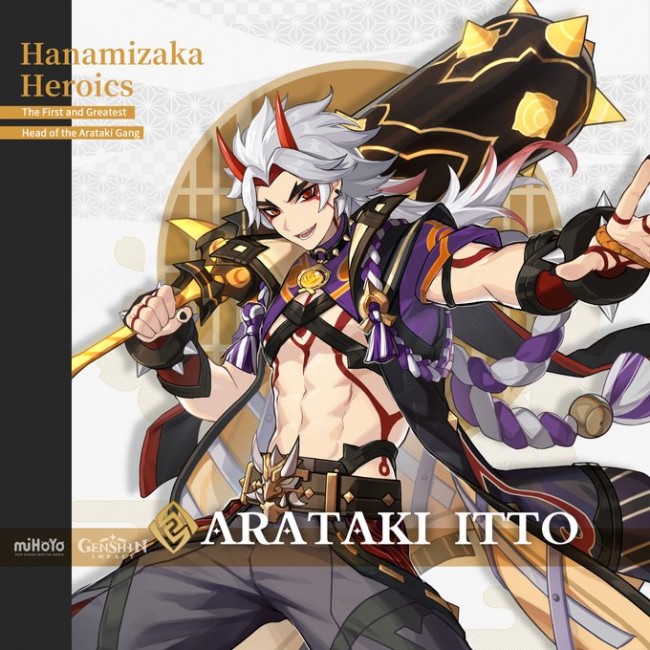 Aratakki Itto, a 5-Star Geo user and the leader of the Arataki Gang and a long rival of Kujou Sara, is one of the two new characters that will be included in Genshin Impact following the release of its Version 2.3 Update.

Itto, alongside Gorou, the general of the Sangonomiya forces, will be included in the role-playing game's Limited Banner, which means players can now summon him and included in their team once the aforementioned version update rolls out.

But in order to use this character in the game better, they must understand his abilities, as well as the weapons and artifacts that suits him better.

Arataki Itto's gameplay in Genshin Impact, according to Pro Games Guide, focused on dealing damage that scales off its Defense and Attack stats, and it excels on dishing on-field damage-per-second using his Claymore, as well as his Geo-based skills.

His Normal Attack, named "Fight Club Legend" according to PC Gamer, will make him perform up to four consecutive strikes. When his fourth attack hits an opponent, he will gain two stacks of Superlative Superstrength, which can stack up to five.

His Charged Attack, once players held it in order to initiate it, will make them press the attack button continuously in order to make Itto attack enemies without using any Stamina.

Each of these slashes will consume a stack of Superlative Superstrength. Once the final stack is consumed, he will unleash a powerful attack.

His Masatsu Zetsugi: Akaushi Burst! Elemental Skill will make him hurl Ushi, a young akaushi bull and a member of the his gang, dealing Geo damage towards opponents that were hit by the ability. When it hits the target, it will grant Itto a Superlative Superstrength stack.

While Ushi is remaining on the field, it will taunt surrounding opponents and attracts them towards it. When attacked, it will provide Itto a stack of Superlative Superstrength, which can be gained once every two seconds.

It will also inherit the Health Points based on the percentage of Itto's max Health Points. Once its Health reaches zero, or once its duration ends, it will leave the field, giving Itto another stack of Superlative Superstrength.

His Royal Descent: Behold, Itto the Evil! Elemental Burst will make him release its inner Raqing Oni King form, attacking enemies using his Oni King's Kanabou. In this state, his Normal, Charged, and Plunging Attacks will be converted into Geo-based ones, and cannot be overridden.

His Attack stat will also be increased based on his Defense stat, while his Normal Attack Speed stat is also increased, and gains him a 20% Elemental and Physical Resistance boost.

The first three combos of his Normal Attack, once it hits, will grant him a Superlative Superstrength stack. When Itto leaves the battlefield, his Raging Oni King will end.

Because of his DPS-centric gameplay while relying on his defense, players will consider the Weapons and Artifacts that they need to choose for Arataki Itto.

One of the best weapons for him, the Redhorn Stonethresher Claymore, according to Gamewith.net, will increase the wielder's Defense by 28%, while its Normal and Charged Attack Damage will be increased by 40% of its Defence.

Another weapon that is suitable for Itto, the Serpent Spine Claymore, while make its wielder deal 6% more Damage every 4 seconds it is on the field, while it takes 3% more Damage.

This effect can be stacked up to 5 times, and cannot be reset if it leaves the field, but instead, it will be reduced by 1 when it takes damage.

On the other hand, the Whitebind Claymore, once wielded, will increase one's Attack and Defense stats by 6% for 6 seconds if it initiates a Normal or Charged Attack. This effect will trigger once every .5 seconds.

As for the Artifact that is suited for him, the Husk of Opulent Dreams, once they equipped him the entire 4-piece set, will provide him up to 54% Defense and 24% Geo Damage bonus, as well as the "Curiosity" effect.

The said effect will gain him 1 stack after he hits an opponent on the field with a Geo-based attack, triggering a maximum of once every .3 seconds. When he is off the field, he will gain a stack every 3 seocnds.

This will stack up to four times, each will provide 6% Defense and 6% Geo Damage bonus. When 6 seconds pass without gaining a new Curiousity stack, a stack will be lost.