'Genshin Impact' 'Adventurers' Guild on Twitch' Event Guide: How to Get the KFC Glider, Other Items 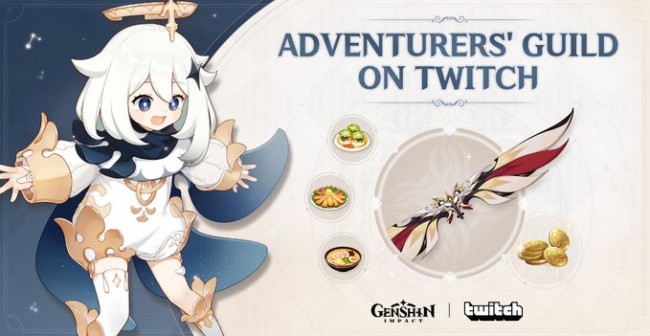 Few months ago, last March of this year, Genshin Impact had a collaboration with the fastfood chain KFC to bring in the game's characters to its several branches in China in form of cutouts and other promotional items.

The said collaboration also gave away the Wings of Feasting, a glider that is colored with the colors of the said fastfood chain, to the players of Celestia server, the game's server that is exclusive for Chinese players.

Now, the players of the multiplayer online role-playing game in the West, as well as other countries, will have the opportunity to owe the said glider as its developers, miHoYo, announced the "Adventures' Guild on Twitch" event.

Dear Travelers, the limited-time event "Adventurers' Guild on Twitch" is about to begin~

In this event, players can get the aforementioned item, as well as other in-game items such as Mora, by watching streams of the game on Twitch.

How to Participate in the Event

In order for them to participate in Genshin Impact's "Adventurers' Guild on Twitch" event, according to a post in the HoyoLAB webpage, players must first have reached Adventure Rank 10 or above, as well as they have an active Twitch account.

Once they logged in their accounts on the streaming site, they will go to one of the streamers' channels that will be participating in the event, which will be posted by miHoYo this coming November 24th.

Once they are watching said channels on Twitch, according to Dual Shockers, viewers will need to buy two Tier 1 subs and give them to said streamers.

They can also either buy said Tier 1 sub for a streamer and give the other to another one, or gift two of the said subs to the community of that Twitch streamer.

Once they give the Tier 1 subs to a streamer, they will receive a redeem code, which they will need to access in order to retrieve the glider and other items.

Aside from the Wings of Feasting glider, according to Noisy Pixel, players will also get 30,000 Mora, a plate of Jade Parcels, two bowls of Tonkotsu Ramen, and two plates of Sauteed Matsutake.

They will only get, and use, one redemption code only, which can be retrieved until December 15th, at 11:59 PM UTC+8 (10:59 AM ET), and those that are already used are not able to redeem it again. They will also need to not lose their codes, as they are not be reissued once they are lost.

Players must keep in mind that only the subscription made during the event for participating streamers that will be broadcasting their Genshin Impact livestreams will be the ones considered valid.