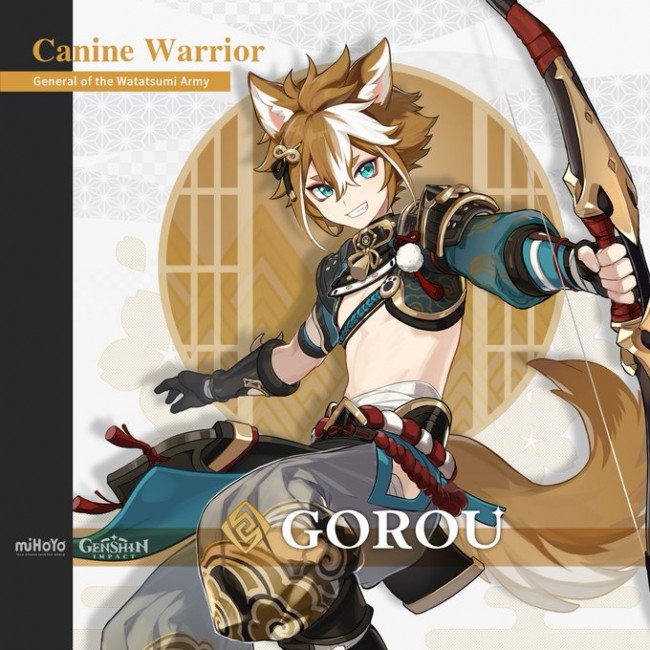 Gorou, a 4-Star Geo user and the wolfboy general of the Sangonomiya Resistance, is one of the two new characters in Genshin Impact once its Version 2.3 Update rolls out, and will be included in its Limited Banner, which gives players the opportunity to summon him in the role-playing game.

But in order to utilize him better in Genshin Impact, they must first understand his abilities, as well as what weapons and artifacts they can equip to him.

Gorou's gameplay will focus on giving himself distance using his bow while dishing massive damage towards his opponents, and providing buffs to his fellow party members.

His Ripping Fang Fletching Normal Attack, according to PC Gamer, will make him perform up to five consecutive shots, while its Charged Attack version will make him shoot an even more precise Aimed Shot with an increased Damage.

While aiming towards a target, stone crystals will accumulate on the arrowhead. Once it was fully crystalized, it will deal Geo Damage to it.

His Inuzaka All-Round Defense­ Elemental Skill will make him deal area of effect (AoE) Damage, while setting up his General's War Banner. The said banner will provide buffs that are based on the number of characters in the party that are Geo users.

If it has three Geo users, it will grant thew "Shatter" buff, which will grant all of the said party members a Geo Damage bonus, as well as the defense bonus and the Interruption resistance.

His Juuga: Forward Unto Victory Elemental Burst will deal AoE Geo Damage, while creating an area known as the General's Glory in the battlefield.

Much like the General's War Banner, the General's Glory will provide buffs to party that is in the area based on the number of members that are Geo users.

It will also move together with their active character and it will  generate one Crystal Collapse for every 1.5 seconds that it deals an AoE Geo Damae to an opponent that is the area's radius, as well as it will pull elemental shards that was created by the Crystallize Reaction within the area of the said character's position every 1.5 seconds.

If a created General's War Banner is currently existing within the General's Glory's radius, it will be destroyed. Also, if the Inuzaka All-Round Defense was activated while the said area is active, it will not crerate the said banner. If Gorou falls in the battlefield, the area's effect will be gone.

Because of his fast ranged attacks while supporting his fellow party members, players will consider the weapons and artifacts that can aid Gorou while playing as him in Genshin Impact.

One of the best options for his weapon is the Favonius Warbow. According to gamewith.net, this bow, once equipped, will give its wielder a 60% chance to generate a small amount of Elemental Particles if it lands a Critical Hit. The said Elemental Particles will regenerate 6 Energy, and it can trigger once every 12 seconds.

They can also equip him with the Elegy for the End, which can increase the wielder's Venti Elemental Mastery, as well as his fellow party members, every time an Elemental Skill and an Elemental Burst hits an opponent.

Another weapon option for Gorou is the Sacrificial Bow, which will give the wielder's Elemental Skills a 40% chance to end its cooldown after damaging an opponent using the said skill. This effect will only occur once every 30 seconds.

For the Artifacts, according to Clutch Points, the Husk of Opulent Dreams will be perfect for Gorou as it will provide a 54% Defense and a 24% Geo Damage Bonus if he equips its 4-Piece set.

The Archaic Petra is another good option for him as it can provide 35% Damage Bonus of the element of a Crystallize shard that he will pick up first.