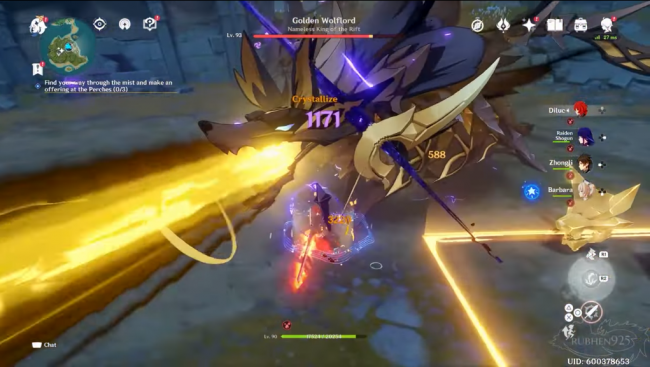 The Version 2.3 Update for Genshin Impact has just rolled out, and it brought new in-game additions, including two new characters, Arataki Itto and Gorou.

Another addition to the multiplayer online role-playing game that came from the said version update is the Golden Wolflord, the newest Boss Monster that players need to face in order to attain an important character Ascension material that it can drop once they defeated it.

But in order to defeat the Golden Wolflord, they need to find it in the game. According to Gamepur, the Boss Monster is located in a small island at the south end of Tsurumi Island, which is right underneath Wakukau Shoal.

Once they are in the area, they will enter into an arena-like structure. From there, according to PC Invasion, they will notice a dimensional rift in a form of a crack at its center. Once they have approached the said rift, the Golden Wolflord will spawn.

Preparations before the Boss Fight

Before going to the said area and face the Boss Monster, players need to prepare first themselves, and their party members, by understanding first what is his weakness and ways in order to be beaten by it.

According to vg247.com, the Golden Wolflord is weak against Geo-based attacks, so players need to have Geo characters in their party, especially if they are long-ranged characters such as Catalyst or Bow-wielders, considering that the Boss is floating in the area during the fight.

The two possible characters that can fulfill said category is Ningguang, a Catalyst-wielding Geo user, and the new character in the game, Gorou, who happens to wield a Bow.

They can also include Geo-based close-range attackers like Noelle, The Traveler (Geo), Albedo, Zhongli, and Itto.

Considering that they will be entering in a Boss fight, it will be expected that the Golden Wolflord will dish out tons of damage, so they need to bring in food that can heal them during the said fight.

They can also bring ones that can boost defensive stats like the Fisherman's Toast and the Jewelry Soap.

Finally, players need to make sure that they have started the "Through the Mists" quest before going towards the area. If not, they will not able to pass through the mists and they will have the hard time entering the said location.

Once it is spawned in the area, it will start attacking the players by shooting them small wolf head-shaped projectiles, which according to PC Invasion, will go straight to their location. These projectiles can be dodged easily.

The said Boss Monster can also attack them with a laser beam from its mouth, which will come in a slow-moving frontal cone towards them. They can spot this once the Golden Wolflord will come to the rear back in order to prepare for the said attack.

In avoid getting hit by the laser beam, they can either run or dodge it. Once they saw the Boss Monster fall after being "exhausted" from the attack, they will initiate an all-out attack to it to deal damage.

But they need to be careful while getting too close to it, as the Boss Monster will attack them by swiping its tail towards them, damaging them in the process. In order to avoid this, they need to retreat away from it after attacking as it will make his way back into the air.

Another attack from the Boss that they need to avoid is a tornado-like one that will surround it, pursuing them, and deal large amounts of damage to them in the process. In order to avoid this, they need to run continuously until they notice that it will fall to the ground.

Once it rose again, it will dish out another attack, which is a Geo-based Ground Splash that hits most of the arena after it dives into the ground, dealing damage to those that are caught in its center. To avoid this, they need to run towards the grassy part of the arena.

Then finally, it will land on the ground to prepare for a quick charge towards them, which can also deal tons of damage. Much like its previous attacks, they need to dodge it. Afterwards, the Boss Monster is now vulnerable, hence the opportunity for them to strike.

If they did not dodge any of these attacks, not only that they will be damaged, but also will be inflicted with a Corrosion debuff, which will cause the Health of the party to be drained slowly for a period of time.

Once the Golden Wolflord's Health reaches 50%, it will create a shield that can nullify any damage from the players. Along with it are the three Rifthound Totem Spirits that will spawn around the area. These wolf heads can also attack them by shooting slow moving projectiles.

In order to destroy the said shield, according to Dual Shockers, they need to destroy these wolf heads by using Geo-based attacks, while avoiding attacks coming from both the Boss Monster and from the said heads, including a massive arena-wide area-of-effect (AoE) one.

Once they broke all of the three wolf heads, the Golden Wolflord will once again become vulnerable against attacks, hence they need to attack it immediately before it rises up again.

Once it rises again, it will attack them again with the same moves it did from the first phase of the Boss Monster fight. From there, they need to dodge again the attacks until they will saw the opportunity to dish out damage towards the Golden Wolflord.

They need to do this repeatedly until the Boss Monster is defeated. Once players are successful in doing so, it will drop a Riftborn Regalia item, which they can use to ascend Itto, as well as Prithiva Topas gems, and the Gladiator's Finale and the Wanderer's Troupe Artifacts.