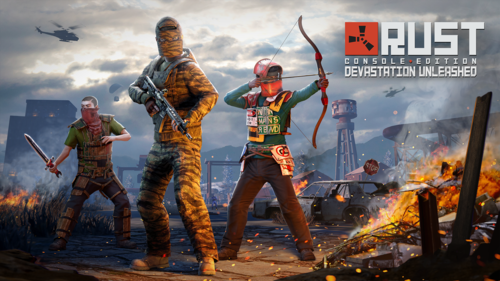 Facepunch Studios and Double Eleven announced the release of the newest update for the Console Edition of Rust, namely "Devastation Unleashed."

Along with the said release, the developers of the online survival game also rolled out the patch notes of the update, revealing a small list of significant additions, as well as fixes to several bugs and issues that might affect its gameplay in the long run if they are not addressed.

As mentioned earlier, the patch notes for Devastation Unleashed Update for Rust's Console Edition revealed several additions for the game. One of those additions is the new Tech Tree that players can access, which can completely change their gameplay experience.

According to Dual Shockers, with the said addition, they are no longer relying on spending their scraps on blueprints as it will allow them to unlock the items that they need in order to build and craft something in Rust.

Finally, Devastation Unleashed gave several changes to the visuals of the game's maps, as well as other changes, including its power substations will now no longer irradiate players, chainsaws will now have a reduced fuel consumption, and an added option for them to disable blood in the game.

Devastation Unleashed also brought in several fixes in Rust's Console Version. According to The Nerd Stash, these include fixes to several issues that cause crashes in the game, such as an issue that causes the game to crash when it is one standby/sleep resume.

It also addressed a crash that was caused after a server side recursive call, an issue that can lead the game to hang when they are accessing the crafting menu, and an issue that also caused a hang on the game's Xbox edition after they switch profiles.

The new update also fixed several bugs in the game, which according to mp1st.com, includes a fix to a bug that causes players to not being able to attach their flashlight to a Thompson sub-machine gun.

It also fixed a bug that manufactured an inaccurate upkeep timer, a bug that causes players to be able to clip themselves through several objects, a bug that might cause several projectiles, like hatchets and rocks, to get deleted when being dropped onto an existing item, and a bug that causes animals or helicopters to target players when in safe zones.

It also addressed a bug that causes the user interface of several shops or vendors in the game to be navigatable with the controller's right stick, and a bug that stops the red X during tree harvesting from sometimes not moving and subsequently not functioning.