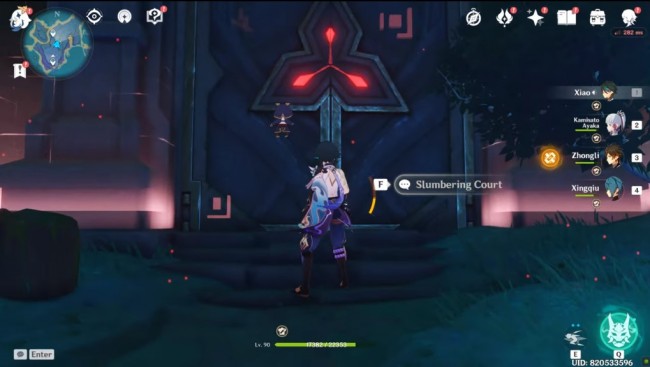 This includes two new characters in the form of Aratakki Itto and Gorou, as well as a new boss that they need to face, the Golden Wolflord.

Another newest addition to the game courtesy of the said version update is the Slumbering Court, a new domain in the archipelago of Inazuma that players need to traverse in order to rewards, including a set of Artifacts that they can use.

Much like the other domains in Genshin Impact, in order to access the Slumbering Court, players must first unlock it.

Before venturing to the aforementioned area, according to realsport101.com, they must need to reach Adventure Rank 30 or above.

They will also need to have completed the Archon Quest Chapter 2 Part 1 - "The Immovable God and the Eternal Euthymia," as well as the Seirai Stormchasers quest in order to clear the area from thunderstorms.

Once they fulfilled the pre-requisites, they can now go to the location of the domain.

As mentioned earlier, the said domain is located in Inazuma, particularly on one of its islands, the Seirai Island, which according The Nerd Stash, is located north of Amakumo Peak, northeast of Koseki Village, or west of Fort Hiraumi.

Next, they need to use the North Teleport Waypoint on Fort Hiraiumi. Once they are teleported to the area, according to PC Gamer, they will head towards east around the cliffs along the beach until they have reached a point that it is lowering next to a broken wall.

Then, they will follow a path to the said an encampment. They need to defeat said enemies first before following another path, this time it will take them up the slope. They will follow said path until they reach a red Time Trial challenge marker on their left, which is next to an Electrogranum.

Then, they will look back towards a path, that will take them up the slope. From there, they will saw a gap at the base of the slope, right next to a dead tree.

They will then jump down, and then travel towards the said gap. Then, they will follow the path until they pass the trees and bushes surrounding it. From there, they will see a cave, where they need to enter in order to find the entrance for the Slumbering Court domain.

Aside from that, there is also an entrance towards the said domain, which is covered by trees and bushes. In order to look for it, they will also need to be in the North Teleport Waypoint. From there, they will go south passing by multiple enemies in the area.

From there, they will check to your left until they saw bluish trees and bushes with a glowing flower growing in front of it.

They will just walk through said bushes, then they will head left before crossing a river. Once they have crossed the said river, they can now see the said entrance.

Once they gain either one of these two entrances, they have managed to unlock the new domain, and will have the chance to clear a set of Domain of Blessing: Necropolis challenges.

The challenges, once cleared, will reward them with the Husk of Opulent Dreams and Ocean-Hued Clam Artifact sets.

If they want to have the former for the new characters, Itto and Gorou, they should clear said challenges, which will make them face against Electro Rifthound Whelps and an Electro Rifthound.