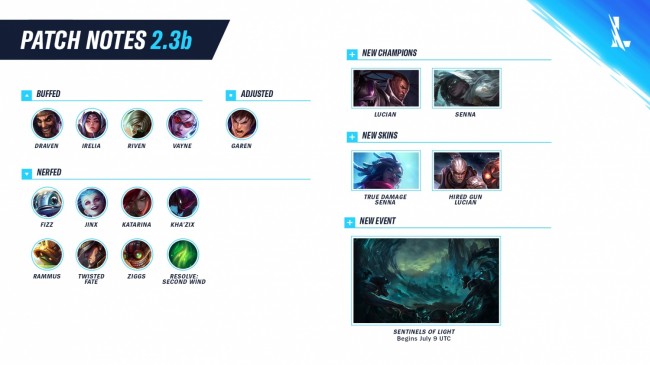 League of Legends: Wild Rift receives their Patch 2.3b Update with the introduction of two PC version Champions that will be imported to mobile.

Aside from that, new accessories, skins, and an event that will be happening in-game that will be coinciding to the biggest inter-game event in Riot Games history, the "Rise of the Sentinels," as well as several Champion balance changes that will be implemented.

The game's Patch 2.3b Update imports Lucian and Senna from their original breeding grounds in the realm of PC to the world of mobile.

☠️ Beware the Black Mist! Patch 2.3b has arrived with champion changes, ARAM balancing, and terrible Ruination. Prepare to fight the darkness as the Sentinels of Light event begins in a few days!

The said release of these two heroes will coincide to the "Rise of the Sentinels" in-game event, especially in terms of their in-game lore.

In the patch notes that was posted in the game's website, Lucian, a Sentinel of Light, is sworn to protect the living from the threat of the Black Mist all while on the path of vengeance against Tresh, who is siding with the Black Mist.

On the other hand, Senna was cursed to be haunted by the Black Mist since childhood, but she joined the Sentinels of Light to combat it only to be imprisoned in a lantern by Thresh. While encaptured, she learned how to use the Mist and once reemerged to a new life, she wields both elements to battle the said forces of darkness.

Along with their release, their new skins, True Damage Senna, which is the costume used for "GIANTS" Music Video as part of the "True Damage" music group, and Hired Gun Lucian, will also be released.

Also, a new set of accessories will be released, which according to Dual Shockers, can be earned or purchased from different sources.

With that said, Wild Rift will might release Champion skins akin to what League of Legends is releasing. Despite of that, Wild Rift may have sub-events regarding the "Sentinels of Light" sooner or later after the said patch.

In Wild Rift's Patch 2.3b Update, nine Champions will receive changes, either a nerf, a buff or both, but in this article, we will provide several of them.

According to Dot Esports, Draven will be affected for this change as Riot said that he has been underperforming lately. However, he still does a decent amount of damage, and some of his skills will be buffed.

For Fizz, he will be nerfed due to his overperformance in the Jungle. His Seastone Trident's Bonus Damage to neutral creeps will be decreased from 200 percent to 150 percent.

Riot had made some "light changes" for Garen to shift his power more into building AD to balance his prowess in the battlefield.

For more information about the rest of the heroes who will receive balance changes, you may visit the patch notes provided by Riot Games regarding Wild Rift's Patch 2.3b Update.

Another Champion change was giving three of them an armor debuff due to the observed mid lane meta. Katarina, Twisted Fate, and Ziggs will have its base armor reduced from 35 to 30.

The Second Wind Rune will also receive a nerf down in order to bring it in line with the other Resolve runes. It will have a Passive flat health regen of 5 HP every 5 seconds and it can regenerate 3 + 1.5% missing health over 10 seconds after taking damage from a Champion.