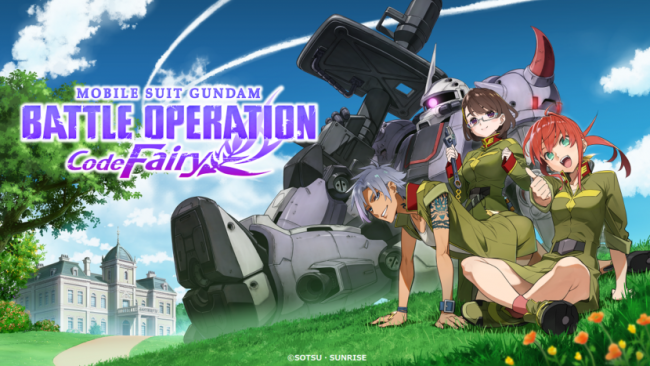 Code Fairy, according to Push Square, has the elements of a visual novel game, complete with animated cutscenes, combined with the usual gameplay and mecha action from Battle Operation.

Much like any visual novel game, Code Fairy will be focused on a story, which will be split into three parts, each has its separate release dates.

Get ready to deploy with Noisy Fairy!

Code Fairy's story, according to NicheGamer, will focus around on "Noisy Fairy," a mobile suit special forces unit from the Principality of Zeon, and formed by Kycilia Zabi, that was assigned to Earth, particularly in North America.

Led by Ensign Alma Stirner, the team is composed of mobile suit pilots like Helena Hegel and Mia Brinkman, along with several choice Zeon Earth Forces personnel. Code Fairy will document the struggles of Noisy Fairy during the "One Year War."

Character designs for the game are created by Masayoshi Tanaka, whose works were also seen in other anime such as Your Name and Darling in the Franxx.

Speaking of mobile suits, Code Fairy will also bring in its unique roster of mobile suits that will be playable in the game. According to the teaser trailer that was released by the developers of the game, a custom painted MS-06G High Mobility Zaku II Ground Type was seen, which Stirner will be piloting in the game.

The trailer also revealed other Zeon mobile suits like the MS-O5L Zaku I Sniper Type with a shoulder shield attached to its right shoulder area, the MS-09G Dwadge, and the MS-08TX Efreet, as well as the typical MS-06F Zaku II.

Aside from its characters and mobile suits, the trailer also revealed Code Fairy's core gameplay, which is similar to Battle Operation, particularly Mobile Suit Gundam: Battle Operation 2 - players must control a mobile suit in order to wipe out the opposing team to accomplish an objective.

The game will also have other features such as voice chat commands, Pilot Skills who acts just like the Bursts from the Gundam Extreme Vs. series, target linking, and mobile suit customization, where players can customize their mobile suits depending on what kind of performance they want for it.

Also in the game, they can practice their mobile suit piloting skills in the Simulator, where they can engage in mock battles to gain experience.

Players can also link their save data from Code Fairy with that from Battle Operation 2, which means that any data coming from the former can be transferred from the latter, and vice versa.

Also, those who finished a special mission in Code Fairy will get a playable unit that they can use in Battle Operation 2, while those who completed a special task in the latter will get a new mission for the former.

As mentioned earlier, Mobile Suit Gundam: Battle Operation Code Fairy will be split into three parts, each of them have five episodes. According to Crunchyroll, Volume 1, which will have the first five "episodes" of the game, will be rolled out on November 5th for the PlayStation 4 and PlayStation 5.

Volume 2, which will have Episodes 6 to 10, is set to be released on November 19th, while the Volume 3, which will bring in Episodes 11 to 15, will be rolled out on December 3rd.

Those who wanted to experience Volumes 2 and 3 of the game may pre-order its Standard Edition, which according to a post in the game's website, can give a 1-day Early Access to the said volumes before they were formally released.

They can also buy the game's Deluxe Edition, where they can also get the bonuses that was mentioned above, as well as a MS-06G High Mobility Zaku II Ground Type, 6 T-Shirt Avatar Costumes, a white and purple Noisy Fairy markings, a "VR Operator Alma" Operator, and 31 Token that can be used for Battle Operation 2's lottery.

Mobile Suit Gundam: Battle Operation Code Fairy's Standard Edition, according to GLyfe, will be sold for $49.99, while its Deluxe Edition will cost $59.99. Players can also buy its volumes individually for $19.99 each.