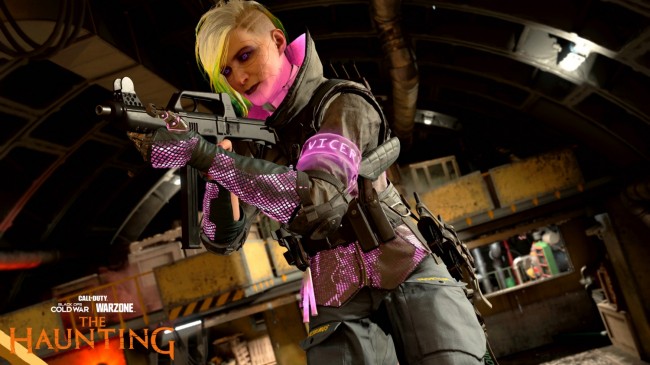 After several teasers, Treyarch announced that the Halloween-themed events and maps in Call of Duty: Black Ops Cold War is introduced courtesy of the first-person shooting game's October 19 Patch Update.

The said patch update also brought changes, as well as fixes to issues that might affect the game in the long run if they are not addressed.

As mentioned earlier, the latest patch update has brought in the Halloween-exclusive event The Haunting to Call of Duty: Black Ops Cold War.

The said event, according to Charlie Intel, will bring in the Nuketown Halloween map, which was added to the game's Featured Playlists and Multiplayer rotation.

The said map will feature a Halloween-themed Prop Hunt, which has props such as skulls, jack-o'-lanterns, spiders, and more that are scattered in the map, and for players to use. The map will also be included in Team Deathmatch, Domination, and Kill Confirmed modes.

Aside from that, the patch update also added in the Scream Deathmatch in the playlist, where two random players will become the killers while chasing after the screams of their victims, along with a revamped Infected, where ever Zombie kill will gave the Survivors bonuses, like bonus reload speed and movement speed.

Aside from these additions for Multiplayer, the patch update also has several additions to Black Ops Cold War's Zombie modes.

According to Gamespot, the said update will ass in the new All Hallow's Eve Outbreak mode, where players need to survive for 10 minutes while planning to escape their exit from the Outbreak region.

Once the timer expires, an exit point will spawn, and they must fight against the undead horde in order to escape safely.

Aside from that, the said update will also make the zombies drop new Jack-O'-Lantern items, which can be exchange for items including Wonder Weapons, support weapons, ammo mods, Chalices, Aether Tools, and armor.

Scare Packages filled with high-level rewards will also be given away as they will be appearing in round-based maps and in every region in Outbreak, while Pumpkin Heads will appear in all Zombie modes, which they can be shot down for Essence bonuses.

According to Dexerto, the said update addressed an issue that causes players to become invisible while playing an arcade game, as well as an issue that causes them to receive previous rewards when they restarting the Der Eisendrache pinball game but they will not participate.

Finally, it also addressed an issue that causes players to receive 1,000 Essence when starting a new match instead of 500, as well as exploit areas where they could not be reached by the enemies, and exploits regarding the usage of the PhD Slider or the Sai melee weapon to slide to unintended areas.