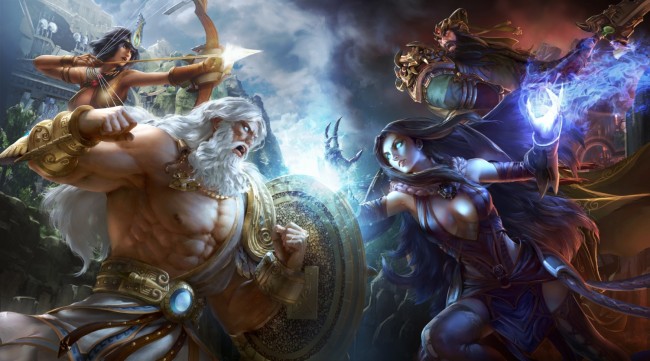 Smite has received its Patch 8.10 Update, bringing in a new God in the third person online battle arena game, along with new Hero skins that themed after the Halloween season.

Aside from the said additions, the patch update will also fix several issues and bugs that might affect the game's entirety if they are not addressed.

The said patch update will introduce a new God, a Celtic Goddess and the Banshee queen, Cliodhna.

The 8.10 Queen of the Banshees Update is LIVE!

Log into SMITE now to try out the new Goddess Cliodhna, and explore the new Winter Deadwoods Conquest Map!

See you on the Battleground!

According to Gamepur, the said new hero is an Assassin that can walk through and inside walls thanks to her Phnatasmal ability, making her attacks towards opponents even more unpredictable.

Her Banshee's Wail, according mp1st.com, will make her wail at enemies before her, causing damage while silencing and deafening them for a time period. Her Flickering Visions, on the other hand, can make her fire a distortion bolt of energy which explodes on contact.

Her Lurching Claw will make her dash forward while dishing out damage towards her enemies that she passes through, while her Tearing the Veil Ultimate will make her unleash banshees in a line, dealing heavy damage to targets in the area while slowing them.

Aside from her arrival in the game, the patch update has also brought in new Halloween-themed skills, which can be purchased with either Gems or Pumpkins. These Pumpkins can be earned by either buying other skins or purchasing the Halloween Chest.

According to Dot Esports, players can buy the Omniscient Oracle Zeus, the Crimson Steel Ares, and the Wiseguy Cupid skins for 450 Gems each.

If they bought all of these skins, they will eventually get three Pumpkins, which they can exchange for the Halloween Hysteria Baron Samedi skin, while buying the Screamy Chibi Izanami will cost them six Pumpkins.

They can also buy all of the aforementioned skins, including the Cybershadow Merlin skin, for 2,310 Gems, while completing all of the event quests will unlock a free Beast Seer Artio skin.

Smite's Patch 8.10 Update also brings in changes in several elements in the game. According to mp1st.com, the said update will decrease the combat timer for every pause in the Ranked Game without any disconnection from 3 seconds to 2 seconds since the last combat action. However, it will increase the unpause cooldown from 3 seconds to 5 seconds.

The patch update also fixed several issues in the game, which includes a fix to an issue where the card art would be cropped for players with no Loading Frame equipped if they were playing Gods at Rank 1 to 4.

It also fixed an issue in its console version where the vibration option for the controllers is missing, as well as an issue where the Role Selection in the Lobby could get large negative numbers attached to it, and a fix to an issue regarding the Loading Frames for Grandmaster Midgardian Macaque and Sanguine.

The patch update also gave balance changes to the Chinese Joust map, which includes an increased Split Bonus and increased stats for the Bull Demon King.

The said update also tweaked several of the game's items, including the Elixir of Defense, the Warding Sigil, the sigil of the Old Guard, the Infused Sigil, the War Banner, the Bumba's Dagger, the Manikins Scepter, the Leather Cowl, the Hunter's Cowl, the Pridwen, and the Spectral Armor.

TAG Smite
© 2020 Game & Guide All rights reserved. Do not reproduce without permission.