'Pokemon Go' Pumpkaboo Collection Challenge Guide: Size Mechanic Explained, Where to Catch It, Will it Have a Shiny Version 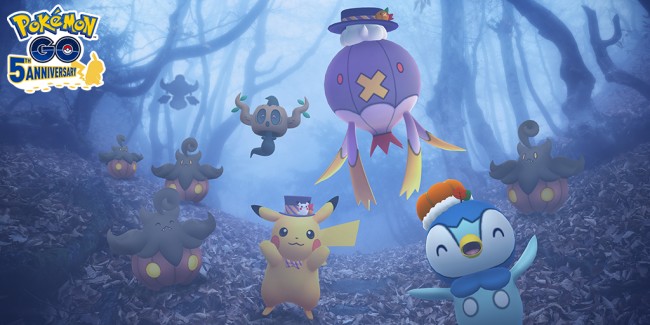 As part of the "Part 2: Ghoulish Pals" of its Halloween Mischief event, Trainers in Pokemon Go will have the opportunity to catch their very own Pumpkaboo, a Ghost/Grass-type Pokemon from the Kalos region, but with a small twist.

They must catch not only a regular-sized Pumpkaboo, but also a small, large, and super-sized versions of the said Pokemon with the introduction of the Size mechanic in the game.

How does the Size Mechanic Works

As mentioned earlier, Pumpkaboo will come in Pokemon Go in four sizes - Small, Average, Large, and Super-sized. This is because the game will implement the Size mechanic.

The said mechanic will let the players know how small or large the Pokemon they caught, as well as how tall or short it is.

Before this, according to Attack of the Fanboy, the values for the size and weight of a Pokemon, once caught, can be seen, but these will not reflect to its visual representation.

With the addition of the said mechanic, which will applied to Pumpkaboo, and its evolved form, Gourgeist, they can now able to see the size difference everywhere in the game, including those that are on the "Nearby" tab.

Each of these sizes will also have different Health, Attack, and Defense stats.

This is similar to Deerling's Seasonal Forms, whose appearance, as well as stats, are different based on what form it appears to be every season.

They can also see the sizes of the Pokemon that they have caught already by checking them in their Pokedex, including how many times they have seen and caught them.

How, Where to Catch them

As mentioned earlier, in order for them to clear the Pumpkaboo Collection Challenge in Pokemon Go, they must catch Pumpkaboo in different sizes.

In order to catch them, according to Eurogamer, Trainers must look for pumpkin patches that are scattered throughout the game. They must scour said patches in order to look for the said Pokemon.

Both a wild Small and Average-sized Pumpkaboo are a common sight in these patches, with the latter also seen in 1-Star Raids, while its Large and Super-sized versions are a rare sight.

Once they caught a Pumpkaboo with a different size, it will ticked be ticked off from the Collection Challenge list, which can be found in the "Today View" screen. To access this, they must tap the Field Research button in the bottom right-hand corner of the screen.

Once they have caught all of the four Pumpkaboos in different sizes, they completed said Collection Challenge, and according to Polygon, will rewarded them with five Rare Candies.

As for a possibility of encountering, and catching, a Shiny version of the said Pokemon, according to Attack of the Fanboy, there is none because of the fact that Pumpkaboo appeared in the game for the first time, and the said variant might appear in the later dares.

The Pumpkaboo Collection Challenge in Pokemon Go will last until October 31st at 8:00 PM Local Time.