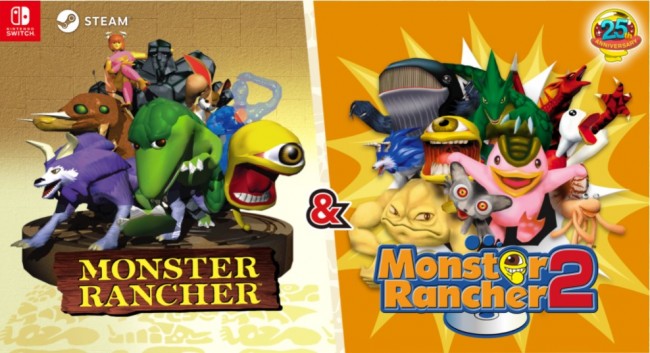 It is time to bring back the nostalgia as Koei Tecmo announced the release of Monster Rancher 1 & 2 DX, a packaged remaster of the classic Monster Rancher series. This is just in time for the 25th anniversary of the said monster collecting series, which spanned fourteen games across different video game platforms.

Apart from the repolished graphics that is suitable for the modern gaming hardware, Monster Rancher 1 & 2 DX will bring in the old school vibe with additional gameplay features that was not present in the two original games' Western release twenty-five years ago.

First released in 1997 and 1999 respectively for the PlayStation 1, the original games in the remaster package, Monster Rancher 1 and Monster Rancher 2, involves mostly on breeding, raising, and fighting Monsters that they have collected throughout the game.

The gameplay mechanic in Monster Rancher was similar to Pokemon, however unlike the latter, which is a role-playing collection-based video game series, the former focused more on aspects of simulated animal breeding, which tends to be seen in virtual pet games like Digimon.

Another unique aspect of these games is the ability of acquiring said Monsters using compact discs (CDs). Players can use any readable CDs in the game, where it will create a Monster using the said CD's metadata.

These would result in creating any one of the twenty Monster types, twelve of them are Common ones such as Dinos, Golems, Suezos and Hares, while the remaining eight are Rares such as Dragons, Magics, Ghosts, and Apes. Players can also combine two of any Monster types to create a new one with traits from its "parents."

In terms of its battle mechanics, there are six traits that will determine how a Monsters does while fighting another Monster.

Power is physical attacks, Intelligence is for defending against energy attacks, Life is the Monster's hit points, Skill affects its accuracy, Speed determines how quick it is to evade any attacks, and Defense that can reduce any damage received from physical attacks.

Players can level up their Monsters, including their traits, by training them through chores or through trainers or experts, which can also give them new attacks.

Aside from the feature's rework, the said game compilation, according to Gematsu, will also bring in gameplay features that are not seen in the game's original Western releases, including additional Save Data and Freeze Slots, additional and slots for the Monster Hall of Fame.

Aside from that, Monster Rancher 1 & 2 DX will add in features to track the training of a Monster in both games and a High-Speed Mode to play through the games faster.

Monster Rancher 1 & 2 DX, according to Bleeding Cool, will be released in the West this coming December 9th for the Windows PC, Nintendo Switch, and mobile devices. The said remastered collection will be first released in Japan and it will be available for download for 3,250 Yen ($ 29.61).

A Monster Rancher 25th Anniversary Box, which contains the PC Version of the collection, will also be available in Japan for pre-order for 15,070 Yen ($ 137.31).

Aside from the game, the 25th Anniversary Box also includes a golden Mocchi metal figure with a numbered metal pedestal, two soundtrack CDs, the game's art book, a copy of Tecmo Player's Mag Vol. 2021, a Monster Rancher 2 secret CD, and a Mocchi-themed backpack.