'New World' Factions Guide: Benefits, How to Join One 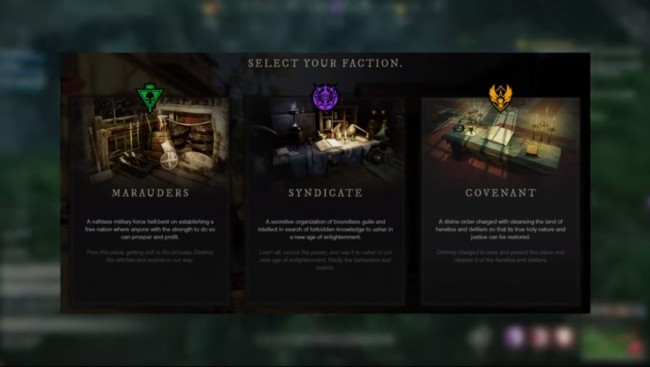 Along the way, they will encounter people that might help them in the progression of their journey inside of the game, and eventually, joining with them to do so. This can be made possible with the game's Factions.

Where is your Loyalty

In New World, there are three Factions for players to choose from -- the Covenant, the Maurauders, and the Syndicate. Each of them, according to Gamesradar, has a motive in controlling the country of Aeternum.

The Covenant, according to Rock Paper Shotgun, is a Faction that is motivated by religion. Its members believe that they are divinely ordained to colonize and protect Aeternum, while purging it from evil, for the glory of their holy order. Their banner is dark red with a gauntlet on top of a golden winged shield.

READ ALSO: 'New World' Saltpeter Location Guide: Where to Find Them, How Transform Them into Gunpowder

The Maurauders, on the other hand, is a militarized group of warriors that are motivated by might. Once conquered, they want to establish the said country as a "free" nation governed with an iron fist. Their banner is green with a golden skull in front of a black hammer.

The Syndicate is a secret Fanction motivated by forbidden knowledge. Their members will not stop at nothing at conquering Aeternum and tap its natural magical resources to increase their power, while ushering in a new age of enlightenment in the country. Their banner is purple, with a large bright eye on it.

Upon joining a Faction, players may receive their benefits. According to IGN, they can provide any special stat benefits, special equipment, and unique items that cannot be obtained by other means.

They will also provide "Faction Quests," which can reward the players Faction Tokens that can used to trade for items that is unique for a specific faction. Aside from that, they will be also receiving reputation in their own Factions once they cleared said quests.

Once they got a required amount of reputation, they can now able to take a quest to increase their Faction Rank, which can unlock even more special items.

Also, players who are in their respective factions can also participate in Faction Wars for territorial advantage. These unique form of player-versus-player (PvP) battle in New World will benefit them increased XP, reduced cost of using workshops, and lowering fast travel cooldowns.

Aside from that, they can also create or join Companies, which can accommodate up to 100 players. The Companies can clear a quest together, trade materials, and more.

How to Join a Faction

In order to join a faction, according to IGN, players must first reach at least Level 10 in the game. When they enter said level, they will complete the Baring Teeth main quest.

Once they complete the said quest, they will able to speak with Urbanus Bixford, which can be seen at the center of the settlement near the trading post. Once they talked to him, it will start the Magistrate's Focus questline, which will begin their route to the Factions.

Part of the said questline is the Contact the Factions, which will be their introduction to the said Factions.