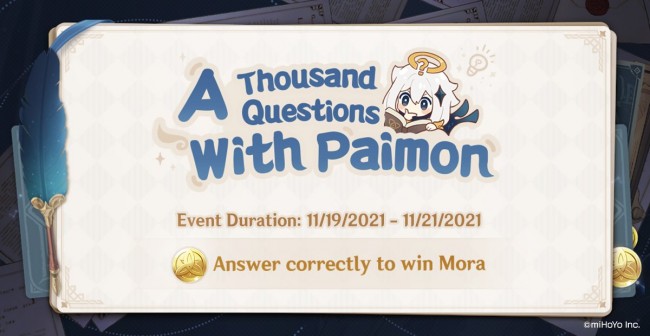 It is that time again where players of Genshin Impact will answer series of question from Paimon to earn Mora as the multiplayer online role-playing game brought back its "A Thousand Questions with Paimon" web event.

This time, aside from the normal questions regarding the game, she added other questions that is related to the Archipelago of Inazuma, including its places, the characters involved, and the lore itself.

The said event will reward them amounts of the aforementioned in-game currency after answering said questions right.

A new challenge with new goals! Take part in the Paimon Quiz Event from HoYoLAB each day and answer questions correctly to win Mora!

How to Join the Event

Much like last time, in order for players to participate in the web event, according to Sirus Gaming, they will need to visit the special event webpage and log in their Genshin Impact account. They must keep in mind that they need to be Adventure Rank 10 or above to enter.

READ ALSO: 'Genshin Impact' 'Adventurers' Guild on Twitch' Event Guide: How to Get the KFC Glider, Other Items

Once they are logged in, according to vg247.com, they will need to answer the questions presented to them in the webpage that, if answered correctly, will reward them 5,000 mora. Answering 10 of these corrections right with reward them 50,000 Mora.

The "A Thousand Questions with Paimon" web event will last until November 21st, which means that players will have the opportunity to earn up to 150,000 Mora.

The Answers to the Questions

As mentioned earlier, players need to answer the questions presented in the special "A Thousand Questions with Paimon" event webpage. Much like the last time, there will be 1,000 questions in the said webpage.

Players can get the said answers in a Google Doc file uploaded by one of the HoyoLab users, but for convenience, this article will show several questions, along with its answers, especially those that are related to Inazuma.

Q: Which of the following works is not sold at Yae Publishing House? "Legend of the Lone Sword"

Q: Which of the following statements about Sangonomiya Kokomi's Elemental Skill is true? "When Cast, the skill will apply Hydro to the character once."

Q: Which of the following statement about Kujou Sara is false? "After Casting her Elemental Skill, Kujou Sara will obtain an ATK Bonus."

Q: Which of the following items will a Lv. 40 Electro Hypostasis will not drop? "Vajrada Amethyst Chunk"

Q: After Raiden Shogun uses her Elemental Skill, Yoimiya takes the field to use her elemental skill and her Normal Attacks. At this time, whose Elemental Mastery bonus would the Overload reaction benefit from? "Raiden Shogun"

Q: Which of the following names is the real name of the boss "Signora?" "Rosalyne-Kruzchka Lohefalter"

Q: What title did Inazumans give to Kamisato Ayaka? "Shirasagi Himegimi"

Q: Which of the following plants appear on the Kamisato Clan's Crest? "Camellia"

Q: How many Acquaint Fates can be obtained from Character Ascension when leveling up a character from Lv. 1 to Lv. 90? "3"

Q: After the Vision Hunt Decree was abolished, who became the provisional clan head of the Tenryou Commission? "Kujou Kamaji"

Q: Where did the inhabitants of Watatsumi Island once live? "Enkanomiya"

Q: On which of the following islands is Inazuma City located? "Narukami Island"

Q: Which of the following reaction damage is the Thunder Manifestation immune to? "Electro-Charged"

Q: Who is the master of Meikyou Shisui Art? "Domon"

Q: Which of the following statements about Raiden Shogun's Passive Talent "All-Preserver" is true? "Mora expended when ascending Swords and Polearms is decreased by 50%."

Q: Which small animal is referenced in Sayu's outfit? "Mujina"

Q: Which of the following character is the fixer in Inazuma? "Thoma"

Q: Who is the owner of Komore Teahouse? "Taroumaru"