'Terraria' 'Don't Starve Together' Deerclops Guide: How to Spawn, Defeat this Boss 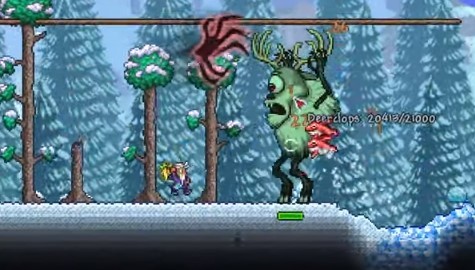 The developers of Terraria announced that the game had a crossover with the survival game, Don’t Starve Together.

Because of this, players of the sandbox action-adventure game will encounter several in-game elements and mechanics that are based from the latter.

One of which is Deerclops, the newest Boss in the game following the Update 1.4.3, which brought the said crossover.

Originally the boss monster since the first Don’t Starve game, Deerclops can only be active in the survival game during Winter. However, they can encounter said monster in Terraria by spawning it in the game.

How to Spawn the Deerclops

In order to spawn the Deerclops in Terraria, they need to create a special item called the Deer Thing.

To make this, according to HTR, they will need three Flinx Furs, five of either Demonite Ores or Crimtane Ores, and a Lens.

The Flinx Fur can be obtained by defeating a Snow Flinx, which can be found in the game’s Ice biome, while Demonite Ore can be either harvested from the small veins that can be found very rarely in the underground of every world that contains Corruption or obtained from drops after defeating Boss Monsters like the Eater of Worlds and the Eye of Cthiulhu.

On the other hand, the Crimtane Ores can also be obtained with the same methods, however they can do this on worlds that contain Crimson, while the Lens can be dropped after defeating either the Demon Eyes or the Wandering Eyes.

Once they got the materials needed, they will go to either the Demon Altar or the Crimson Altar crafting stations, all of which can be seen in either The Corrupted or The Crimson, then place the said materials in them in order to craft the Deer Thing.

Once they crafted and get the said item, according to Gosunoob, they will travel towards the game’s Snow biome, then they will use it to summon the Deerclops itself.

How to Defeat the Deerclops

Once they have spawned the Deerclops, according to t-developers.com, it will be invulnerable for a short period of time. Afterwards, it will start attacking players with three distinct attacks.

One of those said attacks will make him create a wave of icy spikes on the ground, while the second one will make him throw snowballs into the air, and its third attack will make him summon phantom hands, which can either grab them or spin those hands in the air.

Players must avoid said attacks in order to position themselves perfectly from the Deerclops, and attack the said Boss.

Going too close to it will make him spawn the aforementioned icy spikes, while going too far from it will make it invulnerable, so they need to place themselves in the right distance in order to deal damage to it.

Once they defeated the Deerclops, it will leave lots of loot that players need to collect such as the Eyebrella and Lucy the Axe, the new item that was introduced in the Update 1.4.3.

If they defeat the said boss in the game’s Expert Mode, they will also get the Bone Helm, which they can summon the same phantom hands once it is equipped.