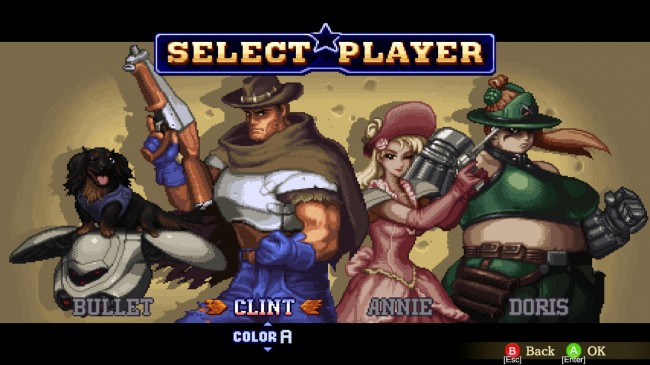 It is time to go to the Wild West for a gunslinging action as Strictly Limited Games, in partnership with Natsume, brings in the Limited Physical Edition for the 2018 "Shooting Gallery" shoot-'em-up game, Wild Guns Reloaded.

Fans of its original 1994 version, Wild Guns, will have a treat as well, as the said partnership also brings in a repackaged version of the said game for the Super Nintendo Entertainment System (SNES).

Time to Shoot Robots in the West

Released in 2016 for the PlayStation 4, 2017 for PCs, and 2018 for the Nintendo Switch, Wild Guns Reloaded lets players controls one of its two original characters -- Annie, who is seeking vengeance against those who abducted and killed her family, and Clint, a renowned space bounty hunter.

For the first time in Europe as physical releases for the #Switch and #PS4, we’re pleased to add Wild Guns Reloaded to our line-up of games! 🤠 @Natsume_Inc

In the game, according to GLyfe, players will shoot outlaws and robots, while jumping, diving and rolling themselves in several stages, from the steampunk version of the Wild West to caves to factories, in order to evade the barrage of bullets coming their way.

Along the way, they will gather weapons that they can use against their opponents, from machine guns to grenade launchers to shotguns.

Not only that, even the characters their unique weapons and special abilities. Annie has her revolver, while Clint has his rifle. Doris has her pair of gauntlets that can shoot bullets, while Bullet has his drone.

Wild Guns Reloaded can be played solo or with friends thanks to its Local Cooperative play feature, which can allow up to four players.

As mentioned earlier, Strictly Limited Games and Natsume will release the Limited Physical Edition of Wild Guns Reloaded, which according to Nintendo Wire, will be available for pre-order starting October 3rd.

They will also release its Collector's Edition, where players will receive not only the game, but other freebies as well.

They will also receive reversible large poster, four pixel art postcards, a sheet of stickers, the game's official soundtrack, a metal necklace with an engraved bullet, a Bullet the Dog acrylic keychain, a character fridge magnet, a Boss Fight acrylic diorama, and the extended game manual. All of these will be incased in a Collector's Edition box.

Those who want to play the original Wild Guns can also avail the physical reprint versions of the game for the SNES, complete with a retro-styled box and a manual. The said version will be available in both NTSC and PAL versions, and it will be sold for $58.99 in the United States and €49.99 in the UK.

READ ALSO: Epic Games Store Gives Away 'The Escapists,' 'Europa Universalis IV' for Free: How to Get Copies